This building was designed to expand the campus of Hudson Valley Community College. The site used was an underutilized lot across the street from the main campus. Currently, the location serves as an overflow parking area. In the center of the site is a historically protected brick building, dating back to 1797. The building designed had three main wings. The Raymond Wing served as the main entrance. The large, central atrium was home to the preserved historic structure. The lower level of the brick building was refurbished as a campus book store and welcome center while the upper level became a cafe and museum. To support these functions, an elevator was included as well as restrooms. The area in the atrium surrounding the historic building became seating for students, faculty, and guests. The ground floor of this wing was home to classrooms, public restrooms, and the necessary mechanical spaces. The balcony surrounding the atrium included the two executive offices, faculty offices, a computer and technologies lab, and a secondary classroom. Extending from the back of the Raymond Wing, the Crucetti Wing was home to the manufacturing lab. The main manufacturing space, under the dome, was designed to serve as both a hands-on class space and a small scale manufacturing center. Also in this wing were a quality lab, a locker room, and offices for manufacturing professors. The Kilgallon wing connected to the building at the seam of the other wings. It was designed to serve as the loading dock, shipping and receiving department, and storage space for the building. It had a separate entry road and also had connections directly into the Crucetti Wing’s manufacturing space. The upper level of the Kilgallon Wing was the conference center. The two main ballrooms were housed in the glass pyramids visible from the street. The spaces could be connected for larger events and the end ballroom had a view over a waterfall and out into the park behind the building. A balcony observation deck, connected to the near conference space, offered views into the dome’s manufacturing floor. The site not only included the necessary parking for the department, it also had an extensive park area featuring a waterfall and stream, garden paths, an outdoor dining area, and a small scale race track for the department’s annual remote control car races. The design of the building took into account some green building principles. All lamp posts were designed to be self powered with solar panels on top. The main roof top of the building was also a solar energy collector. All entryways had a foyer to maintain climate control. The center of the front facade was designed to incorporate a semitransparent media wall facing daily traffic. The skyline of the building included the three wing’s distinctive roof lines which, together, made an abstract image of a sunset over the Catskill Mountains. 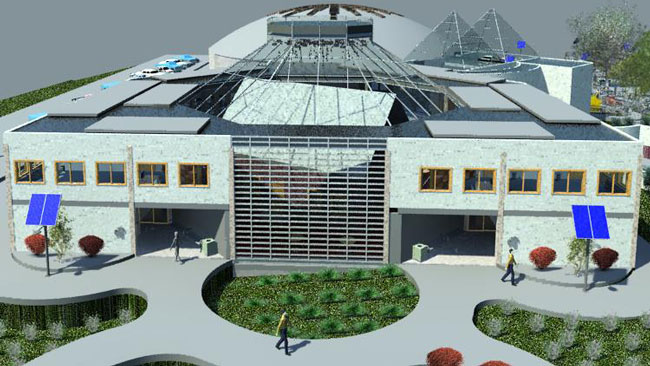 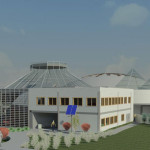 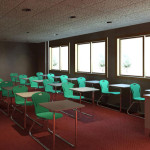 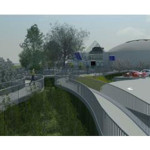 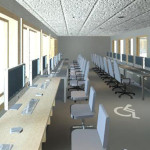 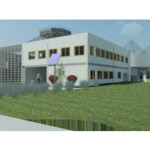