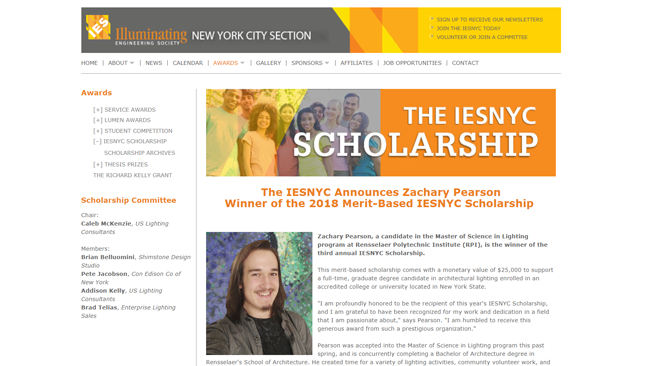 Announcement from the Illuminating Engineering Society of New York City:

Zachary Pearson, a candidate in the Master of Science in Lighting program at Rensselaer Polytechnic Institute (RPI), is the winner of the third annual IESNYC Scholarship.

This merit-based scholarship comes with a monetary value of $25,000 to support a full-time, graduate degree candidate in architectural lighting enrolled in an accredited college or university located in New York State.

“I am profoundly honored to be the recipient of this year’s IESNYC Scholarship, and I am grateful to have been recognized for my work and dedication in a field that I am passionate about,” says Pearson. “I am humbled to receive this generous award from such a prestigious organization.”

Pearson was accepted into the Master of Science in Lighting program this past spring, and is concurrently completing a Bachelor of Architecture degree in Rensselaer’s School of Architecture. He created time for a variety of lighting activities, community volunteer work, and performances in theatrical and dance productions in addition to the demanding BArch curriculum. While an undergraduate, he requested to be able to enroll in a Lighting Workshop Graduate Studio at RPI’s Lighting Research Center (LRC). Although he had not yet had a formal course in lighting design, his theatrical background and accomplished architectural design skills led him to excel in the workshop. Most impressively, he led the class on the initial design and testing team of “Breathing Lights,” a temporary, large-scale light installation proposed by two local artists.

According to his advisor, Russell P. Leslie, RA, FIES, professor and associate director (retired) of the LRC, “Zachary excels in all areas of lighting study, in citizenship to the university and community, and in excellence in his design work. These characteristics are sure predictors that he is destined to prominence in the lighting field.”

“Zachary is a talented, well-rounded student who understands technology, design, and human factors. As an architecture student studying lighting, he has a unique skill set that will help transform the future of architecture, especially through explorations of lighting within built environments,” says Nadarajah Narendran, Ph.D., FIES, head of the graduate program in lighting at the LRC. “We at the LRC are especially proud of Zachary for receiving this prestigious award and of the LRC’s graduate lighting education program and faculty, which provided him with guidance and support.”

Pearson’s fascination with lighting began at the age of six after experiencing the Osborne Family Spectacle of Dancing Lights at Walt Disney World. Later he became involved in summer stock theater and learned theatrical lighting. At 14, he began college and earned two associates’ degrees, in Computer Aided Drafting and Design and Architectural Technologies. At RPI, he served as a research assistant to Ute Besenecker, Ph.D., and was able to study the effect of colors and light, had a lighting internship with Howard Brandston, and as part of his study at the Center for Architecture, Science, and Ecology (CASE) at SOM, he studied the phytoremediation abilities of plants in the built environment.

After completing his degree, Pearson would like to pursue a doctorate. Having been an undergraduate peer tutor, he would like to be able to continue teaching in some capacity, not only on a collegiate level, but also for young children and high schoolers. Also on his wish list is to establish community outreach projects where current lighting students and industry professionals are linked to a local neighborhood where they can create engaging and immersive lighting experiences with input from the residents. Ultimately, he would like a career in theatrical and theme park lighting and design.